When Devon Canada’s Jacob Denis talks about a new boiler design being investigated at his company, you can hear the pride in his voice.

“There are a lot of companies closely watching progress on this technology,” says the senior technical advisor on Devon’s technology development team.

The technology he’s referring to features rifled (ribbed) tubes, instead of the smooth tubes traditionally used in the boilers that generate the steam needed to melt and recover underground bitumen in in situ operations.

It’s a subtle innovation, but one that could have profound impacts for an industry seeking to reduce water use and its GHG emissions intensity.

“This is one of those technologies that enables higher steam throughput along with reduced environmental impacts. So it’s potentially very important to Devon and other producers,” says Denis, who four years ago put together a business case for the technology. Company leaders backed his vision, leading to the technology being introduced as a pilot project at Devon’s Jackfish 2 thermal oil sands facility in 2013.

Ten months later, results validated uplift in steam quality from the normal 78 per cent up to 90 per cent, along with lower water requirements, less boiler blowdown (waste water) and improved energy efficiency. There’s more testing to be done, but the project has stirred excitement inside the industry.

Internal ribbing introduces centrifugal force, causing water to spin and propel forward like a bullet. This helps to separate water from steam and more evenly distribute water inside the pipe, ensuring there are no dry spots which can lead to tube failure. The result: better heat transfer and better steam quality. Learn more at cosia.ca. 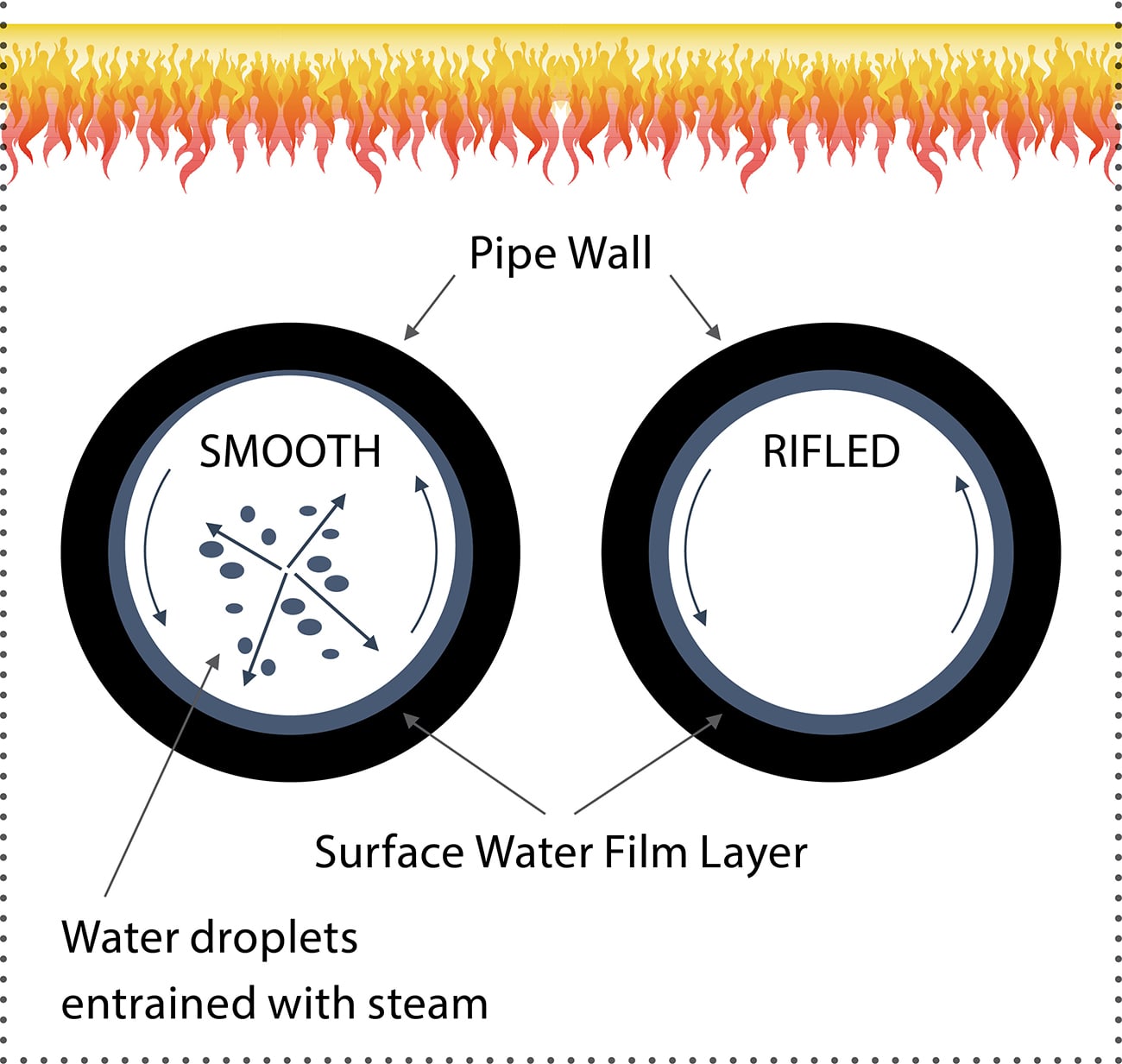 COSIA: A Model for Sharing Innovation

Devon’s project is the kind of example Dan Wicklum, chief executive of Canada’s Oil Sands Innovation Alliance (COSIA), likes to point to when he talks about how the power of technology is steadily transforming the oil sands sector. His organization exists at the crossroads for technology development in the industry.

Formed four years ago, COSIA was created so Canada’s 13 leading oil sands companies could do things differently to tackle the challenge of improving industry’s environmental performance. Their aim is to draw on each other’s technology expertise, finding innovative answers to the industry’s toughest challenges — and do it faster.

“Creating innovation involves a lot of work — a lot of blind alleys and lots of measured failures. But if we can create a system that’s focused, well-resourced and brings the best people together to work in the best ways, then we will be successful. And that’s what we’re doing at COSIA,” Wicklum says.

To deliver progress against these goals, member companies have set up working groups, identified what they want to accomplish and embarked on a mix of short-term and long-term projects.

“We’ve defined opportunity areas and gaps as the difference from where we are and where we want to be in the future, and we have launched projects to close the gaps,” says Wayne Hillier, director for COSIA’s Water EPA.

Members have signed joint venture agreements that define how they collaborate. The agreements, which are an innovation in themselves, allow for each company’s proprietary technologies to be shared among the group via royalty-free patent-use rights.

“As far as we know, COSIA members are pushing the paradigm of sharing technology further than any other sector in the world,” says John Brogly, director for COSIA’s Tailings EPA.

Both Breakthroughs and Incremental Gains

This effort is driving a vast array of incremental improvement projects — everything from enhancing cogeneration of heat and power, to increasing waste heat recovery, and exploring new ways to accelerate reclamation of mine tailings.

At the same time, members are undertaking higher risk, unconventional projects with the potential to create breakthrough technologies. An example includes the development of a molten carbonate fuel cell technology that would capture CO2 while generating clean electricity.

“Our industry doesn’t have a monopoly on smart people. So we’re reaching out to collaborate with other experts worldwide to find new solutions.”

Sharing has led to more strategic and proactive collaborations—joint industry projects where costs (and risk) are shared among two or more members, allowing for greater scale and a wider diversity of resources and expertise to be brought to bear. An example is the Water Technology Development Centre to be located at Suncor’s Firebag in situ facility. Projected to open in 2019, the $165-million centre will allow operators to test drive new water treatment and recycling technologies.

Finally, COSIA has adopted an open sourcing approach to identify technologies created for other purposes that might be useful to closing gaps in the oil sands. Through its associate members program, COSIA has signed memorandum of understanding agreements (MOUs) with 40 organizations. These include large multinationals like General Electric and IBM, academic institutions and innovation hubs like Alberta Innovates and Sustainable Development Technology Canada. COSIA also recently introduced its Environmental Technology Assessment Portal (E-TAP) which allows anyone, even a weekend inventor working from his or her garage, to submit an idea for consideration.

“Oil sands companies have fantastic, world-class people working for them, but the industry doesn’t have a monopoly on smart people. So we’re reaching out to collaborate with other experts worldwide to find new solutions,” Wicklum explains.

Perhaps the biggest example yet of COSIA’s open approach to sourcing innovation has been the NRG COSIA Carbon XPRIZE. Last September, eight COSIA members led by ConocoPhillips partnered with the XPRIZE Foundation and NRG Energy, a U.S. power company, to launch the Carbon XPRIZE. The US$20- million XPRIZE challenges teams from around the world to develop innovative approaches to convert CO2 emissions from fossil fuels into valuable products, like building materials, alternative fuels and other items we use every day. In October, the XPRIZE committee will announce semi-finalists.

While XPRIZE is an inherently high-profile endeavour, everything COSIA is doing is under scrutiny, with high expectations for immediate results. This doesn’t always jive with research and development timelines that can stretch over years from discovery to deployment. Wicklum says he’s very aware of the high expectations surrounding COSIA, and he thinks the alliance is delivering, with real and measurable progress starting to be achieved by member companies.

“Collaboration to foster innovation is never easy. It takes work. But I’ve seen firsthand how companies have embraced the COSIA model over the last four years and have really started to drive it. That’s extremely encouraging,” he says. So far, companies have made about 350 implementation decisions involving technologies developed through COSIA. In other words, not only are technologies being shared, they’re being adopted and are delivering improvements on the ground.

And members are starting to make important headway on environmental challenges — notably, reducing the amount of fresh water needed to produce a barrel of bitumen. Between 2012 and 2014, freshwater use intensity among COSIA companies fell by 30 per cent for mining operations and 36 per cent for steam-driven projects.

“Not only is the COSIA model making sense in terms of promoting collaboration, but the resulting technologies are being used and making an impact on environmental performance changes,” Wicklum says.

Other signs show the organization is on the right track.

Despite the pinch from low crude oil prices, COSIA members continue to push hard to advance new projects. (The number of active COSIA projects this year is up to 252, from 219 last year.) And recently, in June, the CEOs of member companies re-signed the COSIA charter, reaffirming their commitment to the alliance.

These actions signal strong, unwavering support for COSIA among the industry and its senior leaders.

“Collaboration and learning from each other, within and beyond our industry, is a great way to bring more smart minds and funding to advance technology and innovation. And COSIA is a fantastic example of how companies are already sharing solutions as well as collaborating to address technology gaps,” says Harbir Chhina, executive vice-president of oil sands development at Cenovus.

“COSIA is a fantastic example of how companies are already sharing solutions as well as collaborating to address technology gaps.”

“What is exciting has been the level of collaboration that’s developed as a result of COSIA. Collaboration in the oil sands is not new — we’ve been doing it for 25 or 30 years — but not at the full open, transparent level we’re doing it now through COSIA,” adds Joy Romero, Natural’s vice-president, technology and innovation.

Others say that COSIA provides yet another benefit — sharing project costs — a message that particularly resonates in today’s sub-US$50 per barrel world.

“We want to accelerate the pace of our environmental improvement initiatives. And we want to do that at a lower cost, to the extent we can share project costs and avoid duplicating efforts. And that’s become even more important, given the economy,” says Rick Gallant, Imperial’s vice-president of upstream engineering, and chair of COSIA’s shareholder steering committee.

Beyond Canada, Oil and Gas

Finally, insiders say COSIA has created a made-in-Canada model for innovation that’s not only gaining traction throughout the sector, but is attracting interest in other places as well. In fact, in the last two years, COSIA member delegations have traveled as far away as to Israel to not only source new clean technologies that could benefit the sector but to promote Canadian technical solutions to issues such as water treatment.

It seems that, like an ever-widening ripple effect, COSIA is creating new possibilities as it continues to evolve.