Port Coquitlam-based Finger Food Studios is an innovative technology services company and a key contributor in enhancing safety for oil and natural gas pipelines. The company has created an interactive holographic geo-hazard tool which provides a life-sized, real-time digital twin of underground geological conditions along a pipeline route.

“The Holodeck allows us to run simulations against geo-hazards and potential catastrophic errors, then address them before they happen,” says CEO, Ryan Peterson. “The ability to visualize the entire pipeline infrastructure in real-time means we can continually optimize processes, reduce costs and help better manage risk.”

Finger Food Studios was founded in 2009. The name “Finger Food” came about because of the increasing ability to feed the mind using one’s fingertips. “We thought it was clever,” quips Peterson.

While the company began operation at the height of the economic recession, it was also not long after the release of the iPhone. Peterson, one of the company’s co-founders, saw an opportunity to develop applications based on the then-new touchscreen technology. “What we saw at that time was a great opportunity to build a billion-dollar idea.”

“By running a simulation, we can catch and address any areas of concern before they happen in the real world.”

Today, the company delivers innovative solutions for numerous global companies using a combination of technologies including augmented, virtual and mixed reality (AR/VR/MR), artificial intelligence (AI), and robotics. They have been so successful that the company has grown to employ over 130 people.

“The convergence of new technologies with visual processes is helping us to radically change the way people think,” says Peterson. Return on investment for early adopters in this technology is significant, he adds, particularly when it comes to cost reduction, optimization and risk management. “It is definitely the right time for companies to invest in this kind of innovation, especially for those with legacy processes that are ripe for change. This is what our business is being driven on.”

Among those early adopters is the oil and natural gas industry. Finger Food’s pipeline geo-hazard solution arose from a series of brainstorming sessions with Enbridge which were led by Microsoft, makers of the HoloLens mixed-reality smart glasses.

By the numbers: Pipeline safety

Monitoring pipelines is a critical element of safety in the energy sector. Personnel must constantly interpret and communicate data that inform critical decisions. Finger Food set out to reimagine the way Enbridge interprets its data sets and quickly allow anyone to see exactly what is happening underground.

Using raw data, the mixed reality project is set up in Finger Food’s 25,000 square foot warehouse space, The Holodeck, where they actively pursue, test, and create innovative, leading-edge projects. The large-scale, real-time geo-hazard visualization affords users the ability to see design and workflows in a format that digitally mimics the actual pipeline infrastructure and environment. “By running a simulation, we can catch and address any areas of concern before they happen in the real world,” says Peterson. For example, experts are able to better understand ground and water movements that can put strain on a pipeline, without the need to physically dig up the pipe.

“The ability to visualize the entire pipeline infrastructure in real-time means we can continually optimize processes, reduce costs and help better manage risk.”

Oil and gas is not the only sector in which Finger Food is using its advanced technology to reduce costs, drive productivity, and enhance health and safety. “We are currently working with mining companies including Goldcorp and Teck Resources. Our technology also has applications in advanced manufacturing and in retail with Lululemon, Lowe’s, Mountain Equipment Coop, and others who are driving innovation in the sector,” notes Peterson.

Finger Food is driving positive change and that inspires Peterson. “Advances in technology help raise the standard of living for all. I’m excited to be part of a company that is having a big impact not only on Canadian companies but on society around the globe,” he says.

'Smart' and 'pig' are not normally two words that you hear used together in a sentence, but in the case of oil and natural gas pipeline monitoring they fit perfectly together. PIGs (pipeline inspection gauges) are an innovative diagnostic tool used by pipeline operators to “see” inside the pipeline to detect any abnormalities or weaknesses in the pipe. Smart PIGs are intelligent by design and equipped with a battery, a variety of sensors and a GPS system to map data when performing their inspections. A PIG is inserted into and travels through the length of the pipe collecting data on potential hazards including external and internal defects, corrosion and structural integrity of the pipeline systems. A key function of PIGs is preventing problems before they happen—for example, identifying early signs of corrosion so that repairs can be made well before a leak can occur. This technology protects workers, reduces environmental impacts and protects the surrounding communities by preventing leaks or spills and reducing land disturbance. To learn more about pipeline safety and technology visit the Canadian Energy Pipeline Association website. 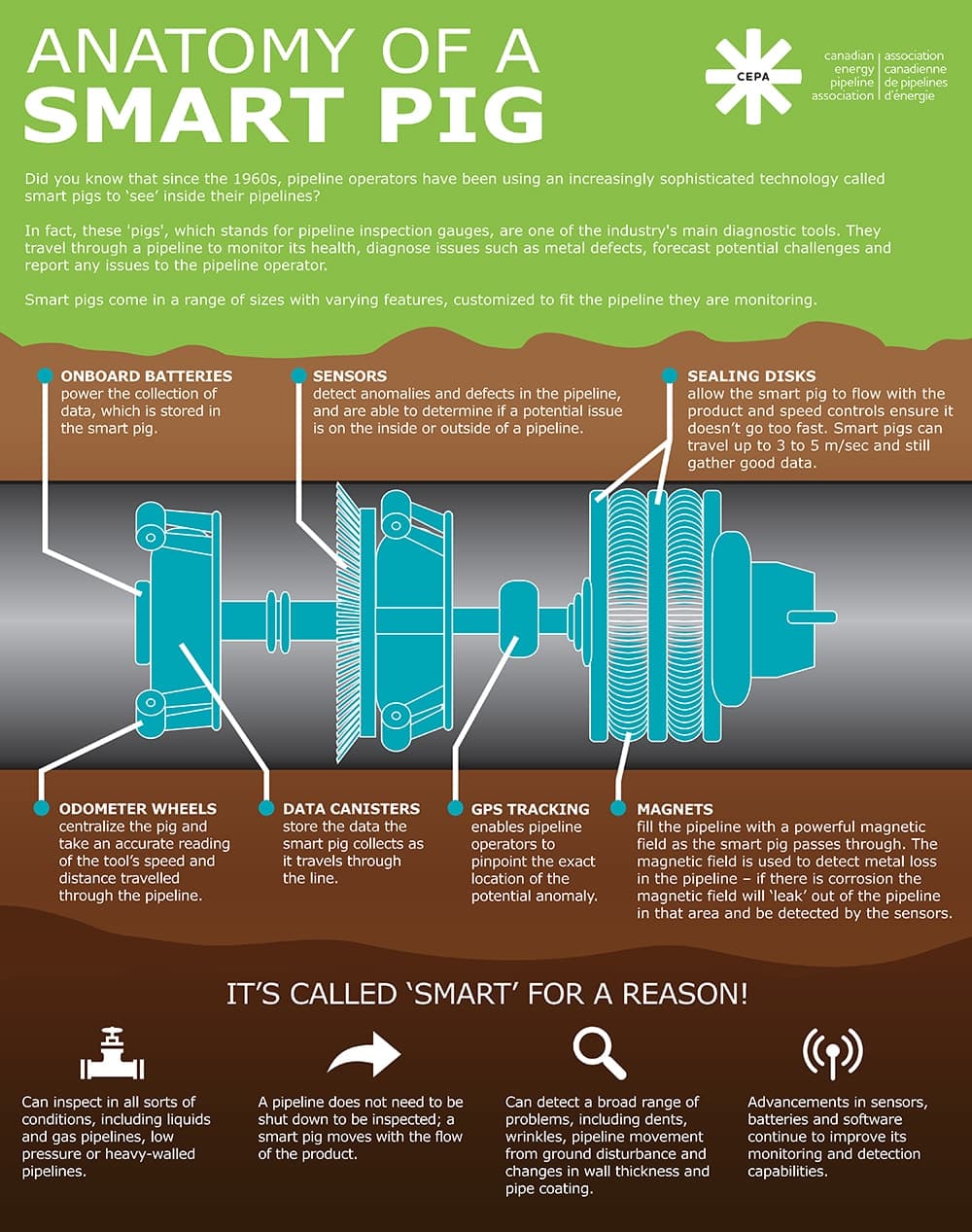