As Canadians, we don’t give ourselves enough credit for the strides we make in reducing our greenhouse gas emissions.  Our most imaginative minds, steeped in a culture of innovation, are working overtime to reduce emissions from the cars we drive, homes we heat and goods we produce: striving to convert emissions to affordable, useful material while minimizing our environmental footprint.

It could take a Canadian company winning the $20 million NRG COSIA Carbon XPPRIZE—the engineering equivalent of the Olympics—to shine a light on the innovative work being done in our country.

Funded by members of Canada’s Oil Sands Innovation Alliance (COSIA) and in partnership with NRG Energy, a leading integrated power company in the United States, the NRG COSIA Carbon XPPRIZE has attracted competitors from around the world, all with the same goal in mind—to reduce carbon emissions and ensure a more environmentally sustainable future for generations to come.

Canadian engineering teams were front and centre in New York in early April as 10 finalists from five countries were selected in this international quest to transform the way the world addresses CO2 emissions.

The finals are divided into two parallel competition tracks: the first demonstrating the conversion of CO2 emissions from a coal-fired power plant, and the second from a natural gas-fired plant based in Alberta.

These innovators and international start-up firms from India, China, the U.S., Scotland and Canada are taking carbon and converting it into a range of industrial and consumer products such as enhanced concrete, liquid fuels, plastics and carbon fibre.

Montreal-based Carbricrete is one of four Canadian finalists chosen by the NRG COSIA Carbon XPPRIZE judges for its innovative approach to capturing and permanently sequestering CO2 in its concrete products. It could change the face of masonry by taking the waste from steel production and turning it into bricks to be used as a lower-emissions alternative to traditional cement.

“Whether we bring the prize home to Canada or not, the greatest reward is playing a part in Canada’s evolution as a leader in innovation.”

Carbricrete is just one example of the many innovative technologies that, operating at commercial scale under real-world conditions, hold the promise of turning emissions into business opportunities.

Whether we bring the prize home to Canada or not, the greatest reward is playing a part in Canada’s evolution as a leader in innovation.

The natural gas component of the competition builds on the important, ongoing work done by the region’s oil and natural gas industry to reduce its emissions by piloting and testing NRG COSIA Carbon XPPRIZE technologies in the heart of Canada’s energy sector.

Each member is investing in research and innovation to help Canada break the link between energy growth and emissions growth, all the while improving the profitability of operations.

In the past five years, COSIA members have invested $1.4 billion to develop 981 distinct technologies to reduce GHG emissions, minimize land impacts and reduce water use.

But it’s no longer enough to innovate and wait for the world to take notice.

Global competitions like the NRG COSIA Carbon XPPRIZE enlist the creativity, ingenuity and power of the crowd, incentivizing solutions for the world’s toughest challenges, such as CO2 emissions.

“As Canadians, we strive to be better – more responsible and more innovative while working to improve environmental performance. It’s now time to celebrate our successes and acknowledge the role we play in leading the world toward a more sustainable energy future.”

Whether we bring the prize home to Canada or not, the greatest reward is playing a part in Canada’s evolution as a leader in innovation.

As Canadians, we strive to be better – more responsible and more innovative while working to improve environmental performance. It’s now time to celebrate our successes and acknowledge the role we play in leading the world toward a more sustainable energy future.

According to the Global Energy Pulse, a first-of-its-kind survey conducted by Ipsos, Canada ranked No. 1 among 11 energy-producing nations as the world’s supplier of choice for oil and natural gas. 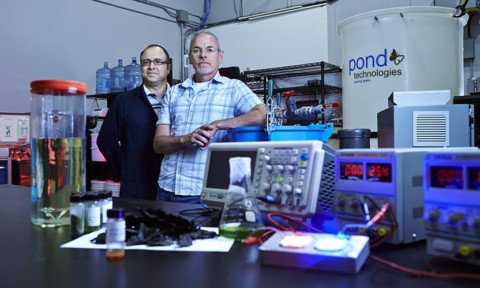