Arman Hemmati, a University of Alberta professor, is working on an enhanced pipeline design which could increase bitumen flow while reducing long-term wear and tear.
“We can make pipelines more efficient and less environmentally challenging,” says Hemmati, an assistant professor of mechanical engineering who’s part of the university’s Future Energy Systems (FES) program.

Hemmati’s innovation involves inserting cross-sections, resembling small teeth, to the interior walls of existing pipelines. The teethlike ridges direct the bitumen flow away from the pipe walls into the middle, where it can flow more easily. By channeling the flow in this way, silica sand and clay particles in the viscous mixture have less time to contact and wear against pipe walls.

“If we can provide changes to the cross-section of the pipe, we can increase the bitumen flow while reducing friction inside the pipe,” Hemmati says.

According to Hemmati, reduced friction means cutting down on pipeline erosion and corrosion.  At the same time, it means pumping stations don’t need to work as hard to drive fluid forward, allowing them to reduce energy use and associated greenhouse gas (GHG) emissions. As well, it could cut down on the need for expensive pigging operations used to maintain pipelines, further adding to efficiencies and emission reductions.

Hemmati originally conceived the idea for the project four years ago during his post-doctoral studies at Princeton University. There he learned about fundamental research to improve the efficiency of water pipes. After joining the University of Alberta as a professor in early 2018, Hemmati says he saw an opportunity to build on this work.

“Researchers have shown this approach can work for water pipelines. Now we’re trying to find if there’s an application that’s suitable for retrofitting existing bitumen pipelines in Alberta,” Hemmati says.

“Researchers have shown this approach can work for water pipelines. Now we’re trying to find if there’s an application that’s suitable for retrofitting existing bitumen pipelines in Alberta.”

Since then, Hemmati and his team have been conducting computer simulations to better understand bitumen flow patterns. They’re also working closely with researchers in the United States to evaluate different design options, including the size of the configuration. They have so far published several technical journal articles on the preliminary aspects of this project. Next year, the team plans to run bitumen mixtures through pipe loops in the University of Alberta’s labs to analyze the impact of different cross-sections on product flow.

While the project is still in its early stages, Hemmati is excited about its potential benefits.

“If we can make small but important design modifications, eventually they will add up to make a huge difference to pipelines’ operations and GHG performance.” 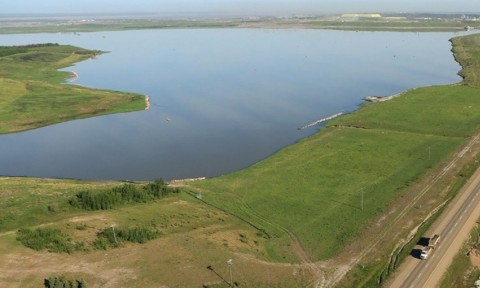