Each year thousands of tonnes of chicken feathers are produced by Canada’s poultry industry, with much of this waste ending up in landfills. Now a University of Alberta scientist, Aman Ullah, leads a team of researchers in the university’s Future Energy Systems (FES) program who have discovered the feathers contain powerful ingredients. These ingredients could help the oil sands decontaminate process-affected water.

“It’s a solution, using a cheap, available material, that could benefit both the poultry industry in terms of reducing landfilling and the oil sands in terms of water treatment,” says Ullah, an associate professor in agricultural food and nutritional science at the university.

“This natural material is like a sponge that will take contaminants away.”

At oil sands mines, operators commonly use hot water to separate the bitumen from the sand. This generates process wastewater which can contain heavy metals and other contaminants. Treating this water is a key step in oil sands operations. In the past, finding adsorbent materials to remove multiple contaminants from the water has been complex and expensive. This could change with Ullah’s research.

“This natural material is like a sponge that will take contaminants away,” Ullah says.

Ullah has previously studied the use of the biopolymer to remove arsenic from polluted water in developing countries. He says the idea for this latest application came from a discussion with Tariq Siddique, an associate professor in renewable resources at the university.

Together they realized the keratin protein could also offer a practical solution for oil sands process water. By adding the material to wastewater ponds, the adsorbent could help contaminants to adsorb and settle, making the water easier to recycle for reuse.

Since then, the researchers have been testing out their concept in the lab. To recover keratin, they wash the feathers and use a milling machine to grind them to powder. After the keratin is treated with modifying agents, it’s mixed with industrial water and stirred in a centrifuge.  Within hours, the material absorbs the contaminants and can be removed, leaving clean water. Already their tests have shown the biopolymer can remove 85 to 100 per cent of heavy metals as well as toxins such as naphthenic acids.

“The beauty of this biopolymer is it can remove multiple contaminants simultaneously,” Ullah says.

Encouraged by their success, Ullah and the team have shared their findings with industry groups like Canada’s Oil Sands Innovation Alliance (COSIA). To evolve the technology further, they’re now planning larger-scale tests on campus or at an industrial facility. 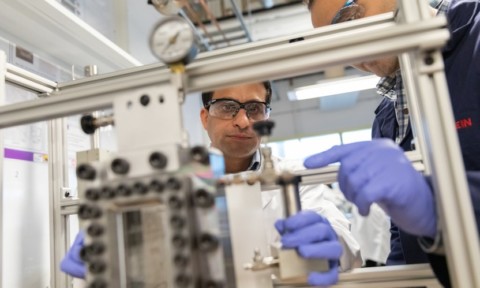