A new study by the Conference Board of Canada shows just how big the economic impact of a thriving Canadian liquefied natural gas (LNG) industry could be. This includes $500 billion in investments, and the creation of almost 100,000 jobs a year. The report, which was funded by the Canadian Liquefied Natural Gas Alliance (CLNGA), was released July 24.

Noting that B.C. is becoming the focal point for developing a Canadian LNG industry, and that Canada produces almost twice as much natural gas as it uses, the report states, “Liquefying the gas and exporting it offers an important diversification opportunity, especially when our traditional export market — the United States — is becoming increasingly self-sufficient in natural gas.

“LNG-based natural gas prices in Asia-Pacific markets have been higher than North American prices for over a decade. Moving their product into those markets would provide Canadian natural gas producers and LNG investors with higher returns. Provincial and federal governments would also benefit from an LNG industry through new royalty and tax revenues.”

Among the report’s key findings are:

As Canada emerges from the economic challenges brought about by the global pandemic, a thriving LNG industry would mean long-term investment and production that can contribute to the country’s recovery.

The LNG industry is extremely competitive and global investors look for jurisdictions with attributes such as favourable policies, location, natural gas supply, supporting infrastructure, regulatory processes, and availability of skilled labour. While B.C. meets many of these criteria, creating a large LNG industry in Canada faces a number of challenges and barriers. Canada’s tax and fiscal environment, regulatory approval timelines, and policy support must be improved especially relative to competing regions such as the U.S. Gulf of Mexico states. Other LNG-producing regions offer accelerated regulatory approvals, municipal property tax breaks, enhanced capital cost allowances, existing pipeline supply infrastructure, and existing LNG facilities with trained workforces, all of which means attracting LNG investment to a fledgling B.C. industry will be challenging.

The report does not examine potential environmental impacts such as increased greenhouse gas (GHG) emissions in Canada. However, it is widely accepted that if natural gas were used to displace coal plants in Asia and elsewhere, there would be a significant net reduction in global GHGs.

In a paper cited in the report (Nie, Yuhao, and others. “Greenhouse-Gas Emission of Canadian Liquefied Natural Gas for Use in China: Comparison and Synthesis of Three Independent Life Cycle Assessments.” Journal of Cleaner Production 258, no. 10 (June 2020), researchers from Canada and the U.S. performed independent life cycle assessments of planned LNG supply from Canada to China. Researchers noted large variability in the potential to reduce global GHG emissions by replacing coal-fired power generation in China with natural gas-fired generation supplied by Canadian LNG, but also noted the potential for “large GHG mitigation by displacing Chinese coal with Canadian LNG for power/heat generation.”

The report concludes, “It will take four to five years to build this size of industrial footprint. But LNG facilities are long-lived assets that would operate over an expected 40-year lifespan. The projected impact shows an LNG industry providing economic growth to B.C., other Western provinces, Ontario, Quebec, and the federal government for decades to come.”

PODCAST: This $40-billion project is key to Canada’s future

LNG: An opportunity for Canada and the world 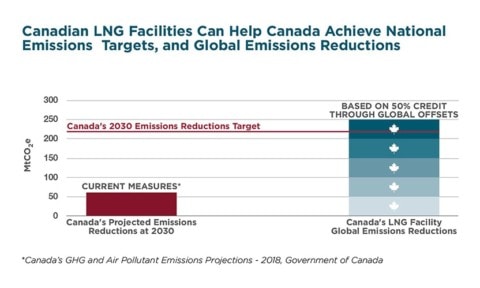 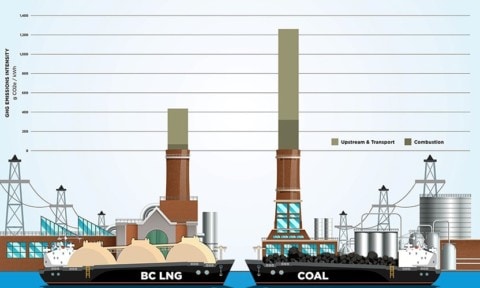