By its nature, oil sands development—particularly mining—disturbs surface lands. Sections of forest in Northern Alberta have been cleared so the underlying bitumen can be recovered. The amount of land disturbed over the past 60 years of oil sands development is about 900 square kilometres—a relatively small (0.2 per cent) disturbance compared to the 371,000 square kilometres of boreal forest in Alberta—but an important priority when it comes to land reclamation and sustainable development.

In fact, all oil sands producers are required by law to return these disturbed lands back to a state equivalent to what it was before the disturbance: i.e., a self-sustaining habitat with native vegetation capable of supporting wildlife.

It’s a requirement and a responsibility companies take seriously: as shown by a unique and important collaborative effort called the Oil Sands Vegetation Cooperative, or OSVC.

Seeds for the Oil Sands

The Oil Sands Vegetation Cooperative (OSVC) supports the successful reclamation of disturbed areas in the oil sands. It is also “a project whose time has come” says Ann Smreciu, the lead for the OSVC. The concept of a provincial seed bank had been on Smreciu’s mind for over 30 years. The reclamation work she was doing in the grasslands earlier in her career highlighted the need for seed collection and banking, but at that time there was no broad, formal initiative.

That changed in 1993, when she started working in the Alberta oil sands region with Syncrude, Suncor, Canadian Natural, Imperial and Shell. There, she met the like minds of Rob Vassov, now Reclamation Operations Lead at Canadian Natural and Clayton Dubyk, now Reclamation Coordinator, also at Canadian Natural. These two reclamation specialists would often meet in the field and share their challenges. One of the recurring themes they discussed was never getting enough seed to meet their replanting needs, and how to get the seed they needed.

The Oil Sands Vegetation Cooperative was “a project whose time has come.”

This informal dialogue developed into action when they recognized that they could work together, leverage each others’ resources, and collaborate with other vegetation specialists. Together, they started a vegetation cooperative to harvest seed. Six oil sands mining companies operating in the Northern Athabasca Oil Sands area agreed to participate in coordinated seed harvesting and banking, and the OSVC was born. As Rob Vassov describes “This homegrown initiative was built out of need, supported and driven by professionals willing to collaborate in the field and share the common challenges facing them.”

Since then, the OSVC has grown. It’s expanded its membership to include companies involved in In Situ development. The companies have moved the project into the Land Environmental Priority Area (EPA) portfolio at Canada’s Oil Sands Innovation Alliance (COSIA), allowing for even greater collaborative efforts and sharing of resources. Through these changes, the OSVC membership has grown, and so did the types of seeds being collected and the areas from which they are harvested. The OSVC now includes collecting initiatives in the Southern Athabasca Oil Sands and the Cold Lake regions.

“This homegrown initiative was built out of need, supported and driven by professionals willing to collaborate in the field and share the common challenges facing them.”

What makes the OSVC different from other, company-specific seed banking initiatives is the depth of collaboration. As Jack O’Neill, Director of the Land EPA at COSIA states “The OSVC is a fantastic example of collaboration in action. The synergy of the COSIA member companies far exceeds the sum of each one of their individual contributions. By working together, member companies have a space to collectively discuss and then act on a number of items including best practices, seed propagation, inventory challenges and the development and implementation of strategies to address these items.”

The process of banking seeds

Seed banking is not a new technology – in fact the preservation of rare or valuable seeds has been occurring worldwide for centuries. The OSVC is unique in that it is a collective effort focused on reclaiming disturbed areas in the oil sands region, and it is also involved in research and increasing knowledge of boreal plant species.

Oil sands operations are required to reclaim the areas they have disturbed to equivalent capability. This means that the vegetation that is used for reclamation should be native to the area, and have genetic diversity. (The greater the genetic variability, the greater the resilience of the reclaimed area.)

Seeds are harvested in undisturbed areas, then, once processed, are sent to the Alberta Tree Improvement and Seed Centre (ATISC) in Smoky Lake, Alberta, which is a facility managed by the Alberta Government. The seed is registered following the standard procedures of the Alberta Forest Genetic Resource Management Standard. These standards ensure seed collections meet adaptation and genetic diversity requirements—which in turn helps ensure that new plant communities established using these seeds have sufficient genetic diversity to survive, reproduce and persist over time in changing environments. Once this registration is complete, the seed is placed in an underground bunker that provides storage at a stable temperature of -18 C.

“The majority of seed we currently have in storage was collected from wild stands and undisturbed areas, and belongs to a variety of forestry, energy, and mining companies, as well as the Alberta Government,” says Donna Palamarek, Provincial Seed Officer at ATISC.

Adds Palamarek, “We have more than 59,000 kilograms of seed at ATISC, representing over 100 species. They’re stored in an underground bunker designed to maintain subfreezing temperatures. The bunker has a dedicated generator for backup power if needed and is monitored 24/7 for temperature fluctuations, mechanical failure, and unauthorized entry.

“Over the course of one year ATISC can ship up to 2,000 kilograms of seed for seedling production, direct seeding, testing, and research trials. “

Seed viability, longevity and germination are critical aspects of the seed banking process. There is little point in harvesting if the seeds don’t stay viable until they are needed (sometimes decades in the future), and if they don’t successfully germinate once planted. To ensure seeds are usable, the OSVC also prioritizes developing and honing a collection and storage protocol for needed plant materials—from how to harvest to how to establish those plants on site.

The OSVC is a forum for continuous improvement via collaborative discussion and sharing of results and learnings. As Vassov relates, “plants trick you all the time. They are not static, they react to the environment around them”. Being able to access others’ experiences vastly increases the knowledge of how these plants live.

The OSVC prioritizes collection and research on characteristic species in the natural landscape that are important to its oil sands stakeholders. Since 2009, seed from 43 species, representing trees, shrubs and herbaceous perennials from various upland, riparian and wetland habitats, have been registered and banked by the OSVC.

Additionally, the OSVC completed a knowledge gap analysis in 2017 to identify areas where the group could add value through research. One of these knowledge gaps being addressed is additional practices for vegetation growth that is not propagated by seed, but rather via cuttings or rhizomes.

Other research underway in collaboration with the Northern Alberta Institute Technology (NAIT) is focused on establishing a seed orchard (where plants are managed for the specific purpose of mass producing seed), and stooling beds (where stem cuttings from an adult plant can be harvested and form new plants). Success would mean an increase in the volume of plant material without greater pressure on natural sites and success in banking hard-to-harvest seeds such as hazelnut. If you leave the hazel seed on the stalk long enough to be mature for harvesting, the seed will likely already have been eaten by wildlife. Seed orchards can protect against this.

Another benefit resulting from the OSVC’s work has been the strengthening of relationships with local Indigenous communities by learning what plants are culturally valued and how to incorporate that traditional knowledge into the program.

While individual oil sands operators continue to engage Indigenous communities on environmental matters, the OSVC has also provided a platform for collective collaboration. “The importance of respecting and acknowledging the land before we take from it is a core message we have heard,” states Ashley Wiebe, Reclamation Team Lead, at Imperial.

“The importance of respecting and acknowledging the land before we take from it is a core message we have heard.”

Incorporation of traditional protocols, such as offerings and blessings, led by local Elders, prior to collection is an important activity that is being integrated into the OSVC’s programs. Protocols have also been implemented at the beginning of revegetation on lands that are being reclaimed. These activities incorporate traditional and spiritual components into reclamation that many Indigenous communities see as vital.

OSVC collection opportunities in partnership with community members and Elders also contributes to a growing, shared understanding of Traditional Knowledge and Western science.

Next steps for the OSVC

The future looks promising and busy. The OSVC is beginning to branch out into new areas such as research into lower vascular plants (e.g., ferns), and collecting wetlands species. Wetland plants add a layer of complexity as the germination success is impacted by water availability, quality and other wetland habitat parameters. Linkages are being built to collaborate with wetlands specialists so the OSVC can understand how to collect, store and then successfully introduce the plants back into the environment.

“By working together, member companies have a space to collectively discuss and then act on a number of items including best practices, seed propagation, inventory challenges and the development and implementation of strategies to address these items.”

It is always a challenge to overcome barriers encountered when dealing with complex natural systems. The key is flexibility and perseverance—accepting that even if everything may be done by the book, the outcome may not be as expected and sometimes something innovative may need to be tried. The key to this, again, is collaboration: by sharing collective experiences and working together, OSVC participants enhance each others’ ability to succeed and secure, in Smreciu’s words, “a consistent, constant, genetically diverse seed population for the future.”

The OSVC is also an example of how the oil and natural gas industry takes its land reclamation duties seriously: planning and preparing for the return of the lands it borrows back to Mother Nature, even before shovels enter the ground. 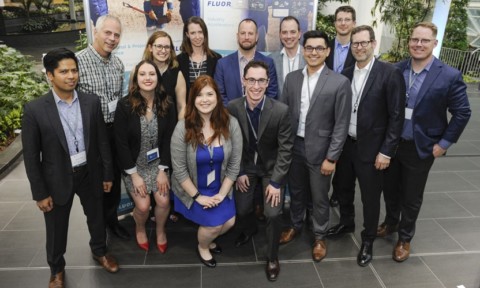